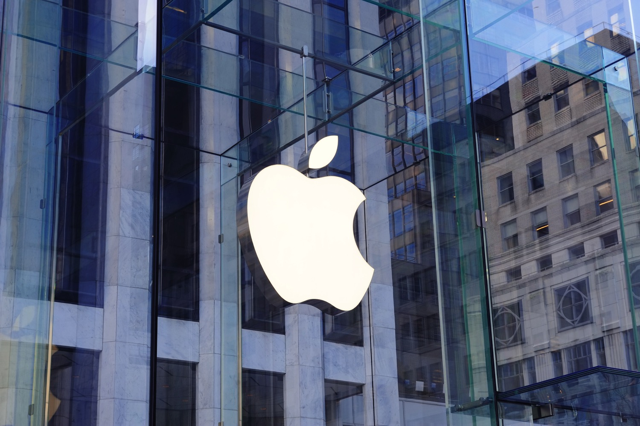 It was a much better than expected quarter for Apple following better performance in Greater China and broad-based growth in Services and Wearables, the latter often getting underestimated by the markets.

Listening to the call and digesting the figures, we can derive two aspects that stand out and will drive the stock price higher.

In the past Apple's narrative always has been centered on the iPhone, precisely iPhone unit sales and the average selling price (ASP). Although Apple stopped disclosing that information in FY2019, analysts still have not abandoned coming up with out-of-the-blue unit estimates for iPhone. For instance, in mid July Loop Capital estimated 182M iPhone unit sales in 2019 with ASP of $733 compared to a consensus of 185M at $754 ASP. However, renowned Wall Street firm JPMorgan (JPM) has made a real fool of itself when it trimmed Apple's stock price target by a full $2 from $235 to $233 as it revised its iPhone shipment estimates slightly. Not only will they never be able to verify their assumptions, as Apple won't disclose these figures, but why a $2 reduction in a stock price target which is way above the current stock price is newsworthy will never be answered.

This just shows Wall Street's obsession with Apple about iPhone figures. In the past iPhone was the double-digit growth driver for Apple that catapulted the stock from one high to another, but at its peak iPhone also accounted for approximately 70% of total revenue for Apple (precisely in Q1 2017).

In the June quarter of 2019, however, iPhone's revenue share came in at 48%, the lowest in years, and still, despite Apple "only" generating $26B in sales with the iPhone, it managed to set an all-time revenue record for the June quarter with $53.8B, approximately $600M above the previous one. 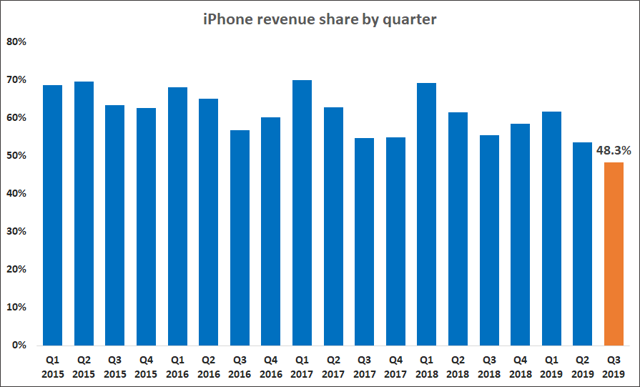 But don't mistake that reduced reliance on iPhone as a claim that iPhone is dead since that's very far away from reality.

The iPhone recorded one of its weakest quarters ever in the previous quarter when sales plummeted 17% Y/Y. This decline has notably decelerated during the June quarter with sales down 12% Y/Y following "strong customer response to our in-store trade-in and financing programs."

More importantly, by selling $26B worth of iPhones, Apple's active installed base of iPhone reached another all-time high in each geographic segment, and with customer satisfaction at almost 100% and ongoing loyalty in the B2B world as well, there's no reason to believe that installed base will shrink anytime soon.

What's more, Greater China performed better than expected and improved in every single product category, thanks to government stimulus and attractive trade-in offers.

We experienced noticeably better year-over-year comparisons for our iPhone business there than we saw in the last two quarters and we had sequential improvement in the performance of every category. The combined effects of government stimulus, consumer response to trade-in programs, financing offers, and other sales initiatives and growing engagement with the broader Apple ecosystem had a positive effect

This shows that despite the ongoing trade war and threats of both sides Chinese consumers have not stopped buying iPhone or other Apple products despite numerous local brands like Huawei, Oppo, Xiaomi etc.

Apple's current iPhone line-up, despite high prices, is doing very well considering the extended length of replacement cycles and the level of market saturation. The next boost is likely to come in 2020 when Apple will go 5G, but as Apple never talks about unreleased products, all we have right now are rumors and Apple's typical commentary that they are working on exciting new products that they can't wait to share with the rest of the world.

All eyes are on Services but Wearables should not be underestimated

The Services segment is where Apple has invested a lot in recent years. It launched several new services like Apple Pay, Apple News and Apple Music and managed to grow the segment at a double-digit clip for many years with the goal to cushion off the decline in iPhone sales and return to top-line growth.

In the June quarter this is exactly what happened with Services setting a new quarterly revenue record of $11.5B, growing 13% Y/Y, respectively 15% if excluding a favorable one-time item in the previous year. On a TTM basis Services has generated $44.4B in revenue, up 18% Y/Y.

As iPhone revenue share declined, the overall contribution of the Services segment more than doubled over the last four years with the segment now accounting for 21% of total sales. 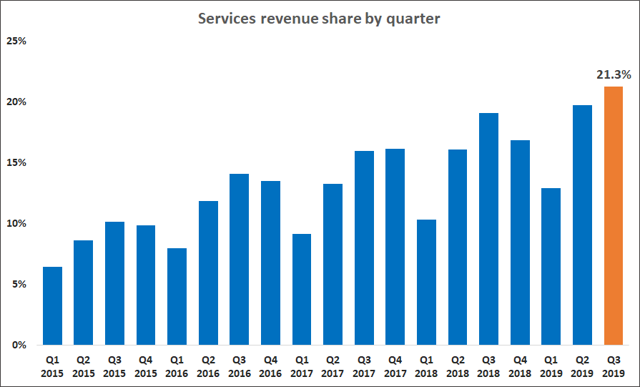 Apple's goal for FY2020 is to double the FY2016 Services revenue of $24.4B to $48.8B. Given that they already achieved 91% of that target with five more quarters to come, it looks more than likely that they will even surpass this milestone.

Double-digit growth in Services is occurring across all geographic segments and very broad-based across the different services Apple offers. 420M paid subscriptions are a giant number (even for Apple), and that pool of subscriptions will only get bigger as the installed bases continues to grow and with new services being launched later this year.

Apple Card will launch in August, Apple Arcade and Apple's video streaming service in fall. Although monetization will not happen instantly due to upfront trial periods, these new services will certainly help to push revenue toward and beyond that FY2020 target.

It should be noted though that a part of the rapid growth in Services in 2018 and 2019 is due the adoption of a new revenue accounting standard. For 2018 Apple reallocated around $2.5B in revenue from other products into the Services segment, so that it reported $39.748B instead of $37.190B as Services. The impact of that new accounting standard on 2019 Services sales is unknown but it's reasonable to assume a similar effect here.

With all eyes on double-digit growth in Services, now Apple's second largest segment, it's easy to overlook the still relatively small Wearables area currently accounting for 10% of total sales. Apple has only started to break it down beginning FY2018 (before it was grouped into "Other products") and as such we cannot really make any long-term comparisons.

This segment is doing extremely well with Y/Y growth of 48% in the June quarter, up from 30% and 33.3% in the two preceding quarters. The Apple Watch has not been taken seriously for a long time but Apple has constantly improved and evolved the product with every new model and software update and continues to attract new customers in droves.

Over 75% of customers buying Apple Watch in the June quarter were buying their first Apple Watch. We continue to see phenomenal demand for AirPods

The Wearables area was never considered to be the "next-big thing" and while it may not be as innovative or ground-breaking as the first iPod or iPhone, it is quickly gaining in importance for Apple. Tim Cook said that:

We stuck with that when others perhaps didn't and really put a lot of energy into this and a lot of R&D and are in a very good position today to keep playing out what's next there.

And things won't stop here. Augmented reality, virtual reality and new everything connected with "e-Health" could have billions of sales potential for Apple in that segment in the future.

And then, we've got lots of what I would call core technology kinds of things like augmented reality, where we're placing big bets and bet that we have a big future, in addition to the health kinds of things that may fall out of the watch

Apple has once again proved naysayers wrong. The iPhone is not dead and the Chinese are not boycotting Apple's products.

Instead, iPhone sales are stabilizing, Services are keeping their strong momentum and Wearables are expanding at sensational speed. Apple's net cash position is just a bit above $100B and with Apple's stated goal to reduce it to zero net cash there is still a long way to go.

Apple remains one of the best businesses to own, also for dividend investors, although Apple's latest dividend raise of 5.5% was very modest. However, with a payout ratio of 25% there is so much more room for future growth.

If you enjoyed this article, the only favor I ask for is to click the "Follow" button next to my name at the top of this article. Happy investing.

Disclosure: I am/we are long AAPL. I wrote this article myself, and it expresses my own opinions. I am not receiving compensation for it (other than from Seeking Alpha). I have no business relationship with any company whose stock is mentioned in this article.

Additional disclosure: I am not offering financial advice but only my personal opinion. Investors may take further aspects and their own due diligence into consideration before making a decision.